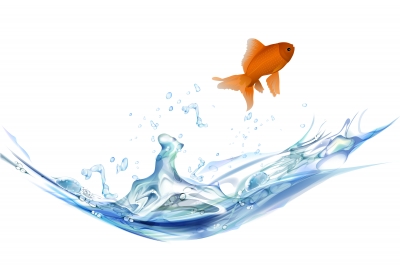 We had a lovely wall-mounted fish tank in our office.

It was a bit like a porthole – round and silver with a glass front and a tank section that sat behind it. The little light glowed down onto the water and reflected onto the two small fish that we popped in there – a minnow and a normal, run of the mill goldfish. It’s funny, when you watch something for a while, that you notice characteristics appear. The minnow seemed to be scared of the bigger goldfish and used to wait until the goldfish had eaten the pellets of food we put in once a day and then he had whatever was left. That often meant grubbing around on the gravel for the pooey covered bits, but that’s what he did. I felt a bit sorry for the little minnow. He was quite an unassuming chap, albeit rather dark and ugly, but he’d earned his place in the tank just as much as the big fish.

This behaviour went on for many months and we used to joke that the minnow got the leftovers from the goldfish. Then one morning I noticed that the minnow was hiding –sometimes behind the filter, sometimes near the top of the tank behind the front ‘porthole’ and sometimes down near the gravel. Perhaps he was just feeling very put upon. I wanted the minnow to stand up for himself. Grab the food before the goldfish got there first. Come to the glass to say hi before his bigger mate floated past calling us all ‘Bob’. But he never did.

And then one day he disappeared. I have to admit to foolishly staring at the tank for a good 10 minutes trying towork out where he had gone. Now bear in mind that we are talking about a tank that’s the size of a cereal box that has nothing but a pump to one side and some gravel in the bottom. Surely with sound mind and a logical head there wasn’t actually anywhere that the fish could go and yet I continued to stare into the tank in the hope that he’d magically re-appear. But no, he didn’t. So I pulled out the filter, swished up the gravel and he was literally no-where to be seen.

It was a very big puzzle. I came to a couple of conclusions, neither of which could be confirmed or denied, unless we’d installed goldfish-cam which with hindsight might have been a good idea. Either he had died, and one of our team flushed him but didn’t confess, or he had some freak accident with the filter in Finding Nemo style or, worse of all, he was eaten. By the bigger fish. And that was the bit that troubled me. He didn’t do any harm to anyone, nor did he actually bother the big fish, ever. But I think he was gobbled up.

And in my worried state I equated the fate of this poor little fish to business. (I do question how my mind works sometimes but bear with me!). It seems as though smaller companies, who mind their own business and don’t push themselves out to the front, may just get gobbled up by a bigger competitor. Not because the competitor is nasty, but because they’ve allowed it to happen by being bland. By being a bit of a dull, grey minnow, who was happy enough to wait for the bigger fish to eat first. It didn’t mean he had to be a bully. But just a bit of extra swishing and bravado might have been enough to save him.

So as the saying goes, you can be a big fish in a small pond but don’t be a minnow!

Please send me the latest blogs!